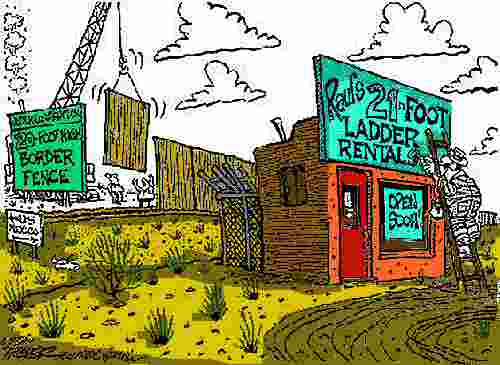 This video is actually kind of mocking the idea of a border wall. But the girl here gives you some ideas of what is going on with the border wall and the border in general.

I would make mention that she is factually incorrect about not apprehending any terrorists along this region of the country. On the Mexican site, the US DEA has identified camps where they think there are Middle East Terrorists basing in trying to get over to the US. Also in Juarez, there has been some Middle Easterns detained.

Another thing this particular story didn’t hit on much is the narco tunnels between Mexico and the U.S.

(Here is another video from CNN Anderson Cooper walks through one of these tunnels.)

What I think most news reports skip over is the vast amount of graft within ICE and Border Patrol personnel. I talk with a lot of Mexicans that cross the border, and for some 25 years now, I cannot find a whole lot of people talking about walking across the desert.  Basically few do that now. So how do they get across?

You start with Cartels which have their people all over Mexico. An illegal wants to cross, so they put him in a half-way house for a week or so, get all the information about their family, friends, and relatives, and then they make sure it is accurate. Then the cartels use coyotes (human traffickers) to move these people across a regular border crossing point.

The cartel has people follow the ICE agents home at night, and offer them $30,000 to $50,000 dollars in cash. They just put the money in their hands and tell them to think about it. They say yes, and then when the coyote (which is known to the ICE agent) comes across the border at that ICE agent’s station, he will let the next 30 or so people cross with a Mexican library card like it was a US passport or Green Card.

(Note: The McAllen bridge crossing points, Pharr and Hidalgo are where we have crossed most of the time over the past 20 years.
“Mr. Luna (focus Border Patrol agent in the video) is not one bad apple, but is a part of a rate of corruption but that exceeded that of any other US law enforcement agency… More than one agent has been arrested every month over the past 11 years frequently for human or drug trafficking.”)

“Walls don’t do you any good if you can hire somebody to waive you through it.” (quote from the end of video above)

The cartels make these people pay the $15,000 dollars for the crossing over the next year or so, and if they don’t their family pays with cut off fingers and such. Eventually death. The illegals often will pay less if they carry drugs as they go across.

It is a regular policy of the Customs Border crossing to never tell the agents where they are working that day, and they are not supposed to have telephones at work so that they cannot communicate where they are. The Coyotes have to constantly cross back and forth at the border checking which of their corrupted ICE agents are at a particular checkpoint. They also swap agents with trucks in the field and border checkpoints.

Throwing more money and building a physical wall will not stop this. When Obama’s lax policy of non-enforcement of the laws was the law of the day, these ICE agents were making $30,000 or more per week. To pass one group over, that is 30 people x $15,000 or $450,000, and they usually cross two groups per day.  So for the drug smugglers, that works out to $328 million a year per coyote.  When you consider the extreme risk of moving drugs from the border to some place in the states, and then selling it, again risking being caught or some other drug dealer stealing it, there is a lot of work and risk involved in smuggling drugs. Trafficking in humans (illegals), you get them to Houston and dump them. The only trouble is forcing them to pay. Fear goes a long way in not having to do much to get compliance.