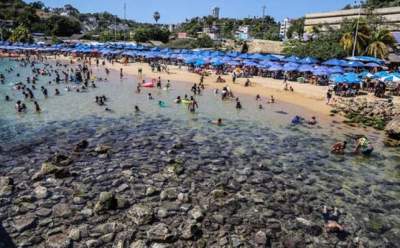 My take on Global warming or Global cooling.  In the end analysis, all this craziness is just demonic in nature.

The scaremongers tell us that the earth is warming and the tides will rise, and a half or more of the present landmass will disappear under rising waters. Yea, right.

Water recedes on Pacific coast beaches due to anticyclone system 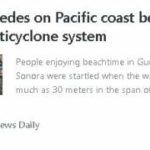 If you read this, you wonder. If the tide were to rise suddenly by a foot to the feet, the scaremongers would be all over this as a result of global warming. But because the unusual thing is that it was low, they skip over it.

We are constantly being blasted by global warming.  We (mankind) are the cause of this we are told. For just a moment, let’s consider this matter.  So let’s do a brief survey here (what we are being told and people are trying to convince us of). (Oh, by the way, recently on a hot day, I was wishing them a good week leaving our church, and I asked if they use the A/C in their car, today would be the day to turn it on. He answered, no, we don’t want to contribute to global warming so, Pastor, we don’t ever use the A/C. Completely serious.)

So things are the things that are killing our planet.

How our world “works”

So what gives? First, let me give my basic high school chemistry and anatomy understanding of this before politically correct thinking.

We have a symbiotic relationship between animals/humans and plants. Plants take in CO² and breathe it in, breaking the Carbon atom from it to make their cellulose cell structure which is basically how they grow and live. (Some other things they get from the soil that is also necessary with this, but cellulose is basically a complex carbon-oxygen-hydrogen module.)

In the process of living and growing plants give off pure oxygen. (Plants also need a small amount of oxygen from the air to live.) Humans breathe in air and breathe out CO².  So simple yet so stupidly ignored in our day basic science.

Humans and animals eat plants, and that breaks down the cellulose and the plant matter into energy waste by-products and CO².

There are several movies in recent years that have hit Hollywood, and one in particular with Keanu Reeves, “The Day the Earth Stood Still” 2008, in which he comes from another planet, or he is a human kidnapped by aliens and then comes back with powers, or who knows what they really wanted to present him as, but he is the “savior of earth.” What the dumb world governments (directed at “our dumb government”) is that they don’t understand that the threat to earth is not something outside earth or internal on the earth, but humanity is the threat to earth. As that point slowly becomes apparent, and the aliens “save” the earth by extinguishing all human life on earth, they realize that humanity is what is wrong with earth.

In the philosophy and false religion of witches, WICCA, they believe in mother earth. By denying or ignoring God and spiritual beings (angels, fallen or not) they believe that people (witches) can know secret knowledge, and by using spells (calling up and using spiritual principles for their use) or spiritual beings (demons that they presume are beneficial and cooperate with them), they can do magic.

The whole mother earth philosophy basically is where ecologically “correct” movement has come from. We cannot harm mother nature’s earth. God is dropped from their thinking entirely as if he does exist. “Sin” becomes whatever opposes their views and practices, and “virtue” becomes whatever benefits them and their movement.

But really, what is behind all of these movements is simply demons. Satan and demons hate humans. They hate all humans and especially Christian humans. The idea to destroy and eradicate all humanity by breaking apart groups and destroying them is a demonic force.

Consider the extermination of the Jews was motivated by demons. All wars have their origin in Satan and demons which pit man against man for some reason, but the destruction is what they want. Consider that abortion (what 55 million in the US since Roe vs Wade and counting) is the wholesale destruction of human beings. Satan causes sickness and eventual death by promoting sin. Drugs, alcohol, and destructive lifestyles are what Satan wants.

A reading of Genesis 1 and 2, meditating on the Word, will give us a good understanding of all of this.

God created the earth to be inhabited by man.

Man is not a parasite on planet earth, nor is earth more important than man. Man does at times “hurt” nature (Exxon oil spill, nuclear plant discharges of radio-active matter, etc.) and that should be prevented. But the foundational understanding of Genesis 1 and 2 is that God intends man to occupy earth, and earth exists for man’s benefit, so man is not “out of his rightful place” on earth.

God commanded man to dominate the earth and animals and plants.

God did not make the earth as a right in itself, and man has to “move over” and not take any benefit from earth. God made plants and animals for man’s benefit, and in the creation account in Genesis, God killed animals to clothe man. Jesus killed fish and offered the cooked fish to his disciples. Jesus offered grape juice and bread to his disciples. God wants us to partake of the things He has provided for us. To not do so is immoral and wrong, and just stupid. If you stop eating animals because you have to kill them to eat them, then the same thinking should be applied to plants. They are living and breathing beings like animals. So what is left to sustain life for us? Salt and water. My doctor tells me not to eat too much salt. Nobody can live off of salt and water, and what sustains us is simply other life forms.

Sin cannot be redefined into some kooky idea of ecology

What all of this really does is to move morality from what God says it is to something non-spiritual. Instead of lying, stealing, and murder being wrong, eating animals is wrong. Flatulence is wrong. (Everybody does it including animals! Note: If you are vegan, you eat all fibrous veggies and you probably do it 10x more than other people!)

We have to insist that only God can define sin, and we cannot dilute what God says by infusing all this green earth junk into our morality. We simply MUST IGNORE and DENY it!

They say that the coolant used in A/C units destroys the ozone layer. I don’t see it wrong in finding a sustitute to replace that. It is more common sense and practicality than anything else. Being a good steward of what God has given us.

But to be a doomdayer and end-of-the-earther, that is putting it into a ridiculous priority. The true end-of-the-earth thing is to die with Christ. You will never find these people saying or agreeing to that though. They all have their religion and it is green and mother earth, and they fight against biblical Christianity.