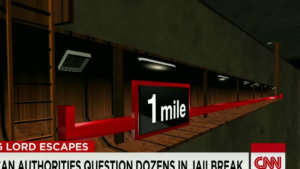 Noisy Chapo Escape. Many people think that the drug lord Chapo Guzman tunneled out of his cell with a spoon or something. This was not the case at all.

First of all, Chapo Guzman had a guard watching a closed circuit TV camera of him every minute of every day. When the tunnel broke through, the guard waited some half hour before he actually sounded the alarm or told anybody.

Moreover, the jack hammer that they used was well heard by everybody above ground. The other inmates complained of the noise all hours of the day and night, and they later confessed that their complaints were answered by the guards with “Shut up or you will get in trouble with the Chapo”.

Professions have estimated that this tunnel took more than a year to do, and if undertaken commerically, it would have cost more than a million dollars. Considering the Chapo launders about 1 billion dollars a year, this is petty cash to him.

It is estimated by people who do tunneling, that there was about a dump trunk load of dirt per day removed from the tunnel. Moreover, since the tunnel traveled more than a mile to its destination, precise plans of the maximum security prison had to be accessible, and moreover, they had to have had lasers or some kind of way to guide themselves to the precise location where Chapo was, and to come up where the camera couldn’t see them.

They used a motorcycle without rubber on a steel rail road rail to haul out the dirt.

Another interesting fact is that Chapo was scheduled to be moved within the prison every 3 months, and between maximum security prisons about every year. But while that was the plan put into place for him, he actually stayed in the same cell for more than a year, and his lawyer fought to keep him from being moved. His lawyer is charged with complicity.