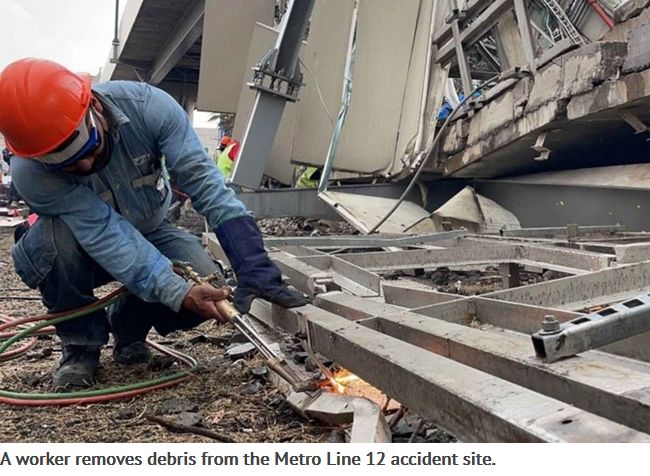 Problems with Mexico Elevated Metro is an article about other problems with the Golden Line, Line 12 that collapsed last month. It is in front of our church.

Bernardo Gómez Gonzáles, head of the college’s structural safety technical committee, told a press conference that 101 experts inspected most of the elevated section of the subway line, which runs between Atlalilco and Tláhuac stations, both in the Iztapalapa borough.

The only part they didn’t inspect was the section where the May 3 tragedy occurred. The collapse of that section was caused by a series of faults during construction, according to the preliminary results of an independent inquiry.

Gómez said the inspection determined that 32% of the elevated section of Line 12, the Metro system’s newest, has “grade B” damage that requires repair.

Among the problems engineers detected were cracks in concrete support columns, insufficient separation between steel beams and concrete slabs on the overpass and welding deficiencies.

The sections on the line where damage was found are not necessarily “high-risk” but “must be analyzed with greater detail,” Gómez said, adding that 68% of the elevated section has “grade C” damage, or common wear and tear, that requires routine maintenance.

The committee Gómez heads advised against resuming services on any section of the line until further inspections and the required repair work are carried out.

It offered that advice even though inspections haven’t identified any structural problems with the underground section of the line, which continued to operate in 2014 while the elevated section was closed for repairs.

“The tunnel section of Line 12 of the Metro doesn’t have structural damage nor deformations that place its stability at risk,” said Francisco Suárez Fino, president of the Mexican College of Civil Engineers’ tunnels and underground projects association.

“The main problems it has are due to [water] leaks … that, with adequate maintenance and an efficient water capture and management system, can be resolved,” he said.

This article is taken from Mexico News Daily in English.

As a footnote to this article, I am driving back and forth on Avenida Tlahuac, basically most of this is under the shadow of this monster. So we have about 600,000 people come and go into or out of the city EVERY DAY down this highway. Most or half or more (340,000 estimated) of that was on the elevated subway in front of our church.

So the actual road is 2 directions, and has parts as wide as 5 lanes and parts as narrow as 1 lane in one direction. This is because the city allowed people to building up to the old dirt road that was Avenida Tlahuac 100 years ago. So, the city decided since all those people are not going to be using the Metro line anytime soon, they had to step in. Normally, we have Microbuses (seats about 20 people) as well as longer buses (seats 50). They run side by side, sometimes 3 to 5 fighting for passengers. On stops to pick up somebody, and the one behind that one runs you off the road to get in front of the stopped one. This is every day normal for us.

So the city makes a dedicated left hand lane for the MetroBus, a 18 meter long double bus. The far right hand lane is usually cars parking or delivery trucks unloading which neither is supposed to be doing that. So the city is sending Trolley Buses on the far right hand lane. (They don’t have the overhead trolley lines though. They have gas or diesel engines and they are running on that. So image, the MetroBus lane has small road blocks running parallel to traffic about 3 inches high, which you can run over but probably don’t want to do so. All of that squishes into a single lane at places. Nasty!

We live south of the church. So they don’t want car making left hand turns in the metrobus lane. So no left turn signs popped up all along this route (about 5 miles). So if we drive legal 🙂 I have to go 2 miles beyond the church to get to a place to turn around and come back to go into the church. The other option is to cross Tlahuac and go via back streets and end up turning back onto Tlahuac right at the first road before the church. But guess what, EVERYBODY IS DOING THIS. So the back streets are overcrowded with cars and trucks and such. Wow! What a mess, and it keeps growing.

For me, there is no option but to cross over into the MetroBus lane. The other lane or two are often stopped with other buses picking up or letting off people, and you get caught out in the middle of an intersection and the light changes. So I try to stay out of the Metrobus lane, but sometimes go into it to get around a traffic jam. I am waiting until the police try to give me a ticket. I don’t know how much they are giving tickets for this because it is simply unreasonable to stop people from using whatever free lane there is to get around traffic jams.