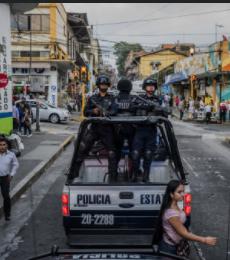 BBC: Secrets of Mexico’s Drug War post is some of my thoughts on the issue of Mexico’s War on Drugs. Note that this post was originally written on April 11, 2015, and I am updating it, November 9, 2020.

This link is to a commentary about this BBC show. I have not personally seen it but I am in the middle of it “live”.

One of the things that I have observed living here in Mexico is that the drug problem is not a specific person or cartel. Any time you cut off the head, it grows another within hours or days. So why do police forces focus so much on the drug lord heads?

When I first got here, I really got “happy” when the Mexican government caught a major drug lord. I told my Mexican friend that now things will change, and the drug business will be hard put to survive. He laughed so hard that it embarrassed me. “No my friend, this is all show.” As he explained, there are drug lords, and then there are the corrupt and honest police and politicians. Nobody really knows which is which, but between them, there are dealings.

When Mexican President Salinas de Gotari was in office, it was said that when the US DEA notified their observance of some drug lords, within hours these drug lords would pick up house and move. Usually, within 24 of telling the Mexican drug authorities, the actual drug lords knew of the DEA watching them.

So how does this work? First of all, there are cartels. They build networks, and squash all the drug selling competition. Once you get a cash flow of millions of dollars every month or week with little expenses what do you do with it? You buy cars, houses, and luxuries, but the government is watching all that, so there is only so much you can do. I saw a Time magazine article about cocaine one time that said that a kilo of cocaine in Colombia cost about $100 dollars (back then, in the 1980s I think) but on the streets of Europe that was like $280,000 dollars. So a business where the markup is literally thousands of percent, you can afford to lose money (discovered drug transports), and you can slosh money around like mad.

One of the things is that the drug cartels try to get “in the back door” with the politicians and police. By this I mean that they get in contact, negotiate deals, and pay off people. Then the politicians come back wanting money or they “sick their dogs on them.” The drug lords and cartels like this, because it means they have a lever to get things done and get information via the officials. But it also backfires, because if the drug lord gets greedy (or the politicians), then they know exactly where and how to take them done.

So a major drug lord that gets captured probably went afoul of some power broker in the Mexican government. It was not the expertise of the police forces, but they didn’t pay or cooperate “under the table”, so their hand was called on the top of the table.

Another understanding is that small-time guys are really a bother for the big cartels because they are competition. When you have 1000% or 2000% mark up, it is very easy for a small-time guy to come in and sell the drug at only a 500% markup, and that is bad for the big guys business, so they turn the small-time drug dealers over to the police, and it makes the police “look good” on TV.

But what is really amazing is that these guys give up to the police without a fight most of the time. The real violence is when people get mad at somebody (another drug dealer or the police, usually corrupt police, or good police who won’t budge on taking bribes), and there is vengeance. That gets bloody. Normally it is the drug cartels that want to scare people off.

I remember of a small town near the US-Mexican border where the 40 some police were put in a barracks in the police station, and their guns were taken to be compared against known crimes. In that town (think it was Laredo), it was illegal for policemen to have a cell phone. Why? Because in any drug bust or stakeout, the drug lords knew before the police left the station because they had regular police reporting to them. This is because of payoffs, or threats on their life or their loved one’s life.

The bottom line here is that drug use must stop. It must stop at the top (selling) in the middle, and at the bottom street level. We will never be rid of this thing until the money is broken from protecting it, and until people are put in jail. Frankly, the death penalty should be fully in effect for these people.

It is amazing that the Mexican government is forcing the drug lords’ hands by making the buying, purchasing, holding, etc. of high-value items (expensive cars, mansions, businesses, etc.) forces in every case an investigation of how that person got his money.

As a side note, Mexico has seen TV news reports of the fall of some of the top drug cartel leaders (Chapo Guzman for example). The step by step entering of their safe house and a video tour of how they lived is seen on the local news. What I can say about this is that these people have an awful lot of money, but it doesn’t do them much good. Their lives are really limited and they have to be paranoid (think Osama Bin Laden type of paranoid lifestyle). They may have a dozen safe houses, but their life there is very poor. They have servants and eat normal food, but they see everybody as a security risk. The idea of a drug kingpin living in extreme luxury at a beach resort, in a mansion on the beach, well, you never see that from what we see on Mexican TV.

One guy was living out in the country, in a shack, with an outhouse. The guys ran a drug cartel in Morelia and made literally millions every month, but he only had a firework fire, a kettle, a donkey where he was living (alone in the woods kind of thing). When we saw how the Mexican authorities “took him down without a shot”, I really wonder how this kind of thing continues to regenerate itself. With that guy’s lifestyle, well, any Mexican with a small business would live better than he would. Maybe he had/has a dozen houses in the city, but the Mexican politicians are the high luxury lifestyle people, not the drug lords. So who is really the bad guys here? The corrupt politicians who stay in office because of their “hard-nosed drug policies” or the drug lords? I think maybe the drug lords (given over to riches, but not enjoying them much) are being used by the politicians in the end analysis.

By the way, Mexico with some 40% of its population making below minimum wage here ($7 US dollars a day) has the highest politician salaries in the world (president, senators, representatives). Interesting to reflect on these things. BBC Secrets of Mexico’s Drug War

We now have a new Mexican President, Lopez Obrador, and he has basically declared an end to the war on drugs. That means in their mind (the Mexican government’s mindset) that they are not pursuing the prosecution of drugs, nor of drug lords. They just have given up. Obrador went to visit Chapo Guzman’s wife.

More articles on Life in Mexico