Torture and Human Rights Violations are Common in Mexico

The United Nations special reporter on torture says it’s widespread in Mexico, and Ernesto López Portillo and Nancy López agree. It’s a common occurrence, say López Portillo, the executive director of the Institute for Security and Democracy (Insyde), and López, of the Mexican Commission on the Defense and Promotion of Human Rights (CMDPDH). The two claim torture often occurs without investigation or punishment…. According to López, information obtained from the Attorney General’s office (PGR) demonstrated that although the office denounces torture, there is no evidence to back that up, nor is it punished.

This news article is a good read about Torture Common in Mexico. Basically it reveals publicly what we who live in Mexico have known for a long time privately. Police regularly beat confessions out of people, and the article makes the point that even police torture of police is common. This is how the Mexican police work, their mentality.

Living in Mexico for 30 years, my take is simply that the Mexican police are incompetent. Torture Common in Mexico is simply a product of this corruption. The factors that contribute to this are the following:

(1) No educational base. It is amazing to see the ignorance of these officials. I remember a few years back, a private school that trains police forces, and also does studies into related areas. They took an inquest, and they found something like 30% of the police they interviewed has a 1st grade reading level. How can they enforce the law if they have to have somebody else read it to them? Patience is not these guys and gals strength by the way. Here in the Mexico City Daily News, there is an article about a few states that are now making it illegal to make the policemen work 48 hour shifts, yes you read that right. So they are sleeping somewhere while on duty.

(2) The low moral quality of most police. To be truthful, this is a factor of the Mexican culture in general. It amazes me how patrol cars regularly break the traffic laws of the signs posted on the road. Police are the first ones to disobey traffic signs. Since the upper echeons have repressed bribe taking in recent years, you can be in front of a patrol car at a light, with a no U turn sign, and you make a U turn, and the cop won’t do anything. This is common. There are no laws here except do whatever you want to survivie. My most beloved one is to go on the freeway between cities (100 miles or more between exits kind of thing), and you come up on miles of cars backed up. First time this happened, a semi cross the medium and went the wrong way in the opposing lane of traffic. After 20-30 cars followed I did too. We were in the far interior lane, and the opposing traffic beeped and went to the outside lanes. When we got to where the problem was, the road construction people were pulling up concrete in all lanes in the direction we were going, and they left the traffic coming with no option except to go back. The road should have been blocked off, but wasn’t, and there were no lights, no signals, nothing. Just piles of concrete, some heavy machinery, and holes in the road that made it impossible for any traffic to get by. This was about 3/4s of a mile of that. We finally got back on our side of the road. But now when something happens and the cars all stop, nobody moves for like 20 minutes, and I scoping out a semi to run block for me on the opposite side of the road!

To be honest, there are some honest cops out there. We have some in our church, and I have known several. But the system is contaminated so greatly that they barely can exist. They are demanded to participate in the corruption, and they regularly are chastized by being put in a minor position (guarding the locker room) or are put in the most dangerous situations out there. Most policemen in Mexico are cowards, and they are not going to risk their lives for anything, much less for doing their duty.

(2) Top down corruption of the system. Back about 15-20 years, there was a police chief of Mexico City that was scandalized. But in the reports and things about his great money making machine, one thing about the system became very apparent. The joe-cop-on-the-street has a boss. To get to be a police, his boss comes by and picks up “his cut of the day’s receipts”, i.e. the policeman on the street takes bribes, and his boss wants his cut. That system worked its way up to the police chief of Mexico City, and that guy made literally 100,000s to millions of dollars per day “from the system”. This is most often from a policeman stopping a motorist, and charging him for something legitimately wrong or made up on the moment. I note that in recent years, there are now judicial police, and traffic police here in Mexico City (and federal police). The Judicial police look into crimes, and traffic police into traffic violations and situations dealing with traffic. Now among the traffic police, there are official traffic ticket police which are the only ones that can officially write you a ticket. These have florescent shirts to identify them, and they have some kind of hand held device that has a camera attached to document the wrong doing. That is because of the commonness of any policeman charging you with a crime or traffic infraction and when you give him what he wants for a fine, he never gives you the ticket and just walks away. By the way, NO POLICEMAN IN MEXICO CAN CHARGE OR RECEIVE MONEY FOR INFRACTIONS. You pay in the bank because the government never sees the ticket money.

(3) Corruption by organized Crime. As if the organized crime mob scene WITHIN THE VERY POLICE FORCES wasn’t enough, we have drug cartels and organized crime that is pervasive. I remember hearing in the times of President Salinas Gotari, that he had links to the cartels, such that when the US DEA notified their Mexican counterparts of the location of known drug lords, and that the US was observing by satellite or somehow, within a few hours of that, the drug lords under observation were moving. Almost immediately when the Mexican authorities know, the drug lords know. Another indication was when one of the chiefs of the Mexican DEA was arrested for leaking news to the cartels, and he was making $500,000 a month from them (on their payroll).

Some people have pointed out the drug arrests, and I always thought that that was the Mexican police doing their job. No. There are organized cartels, and there are start-ups that are just a bunch of guys with a marijuana farm out in the woods. They start selling. When they get significant, the drug cartels notice and come asking for a large cut of their profits. If they cannot get money out of them, and usually they don’t want money, they want extinction of the competition, then they turn the information over to the police, and they make an arrest and drug bust.

Just because the Mexican police take down a ton of drugs, it doesn’t mean anything. The issue is eliminating the competition. Even the drug lords that they take down is often because they get too independent from those controling them, and in the drug cartels, betrayal is common, and nobody trusts anybody else, especially your own immediate subordinates. Things get worse, because if a cartel leader gets caught, goes to jail, and is “out of circulation”, many times he has hidden staches of money, and he gets somebody to go get that, and take out a contract on those who took over his place when he went down. There is a constant loyalty element, or betrayal (not being loyal) results in death. We see one cartel threatening other competing cartels, and within its own structure, there are often shake ups. 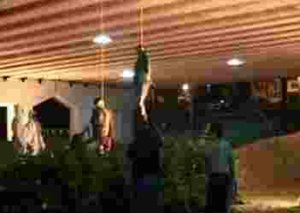 Even whole cities get into this. Cuernavaca, a city an  hour south of Mexico City, had drug lords, and some of their citizens were helping in tracking down the drug trade. So the cartel just fixed things. They went out and caught people (mostly young people) and hung them (some died by that, and others were shot full of holes beforehand) from the bridges. Talk about torture Mexico, this is really bad. These people had no connection nor reason why, they were picked at random.

16 police dead after attacks in Jalisco