55% of Mexicans cannot afford the basics

This is from an article about the Mexican workers, and how Mexicans cannot afford the basics.

The basic food basket is beyond the reach of as many as 66 million Mexicans, according to a study by the Senate’s Belisario Domínguez Institute.

In percentage terms about 55% of the population cannot buy the food necessary to satisfy basic nutritional needs, up from 47% in 2010. Until now, the study said, “the increase in labor flexibility, rather than lead to employment growth, has affected its stability and therefore has not allowed for growth in social security.”

“the International Labour Organization, an agency of the United Nations, reached the same conclusions in a global report on salaries in 2012/2013, which said slow growth in productivity indicated a standstill in real wages.”

For us living in Mexico, this is no surprise. Mexico has about 100 million people, and more than half are in the black market jobs, working without paying taxes, at subminimum wages, and basically no help at all. According to Mexican law, every worker has to enter one of two social programs, one for common workers, and another for supervisors and profession people. In these social programs the person gets basically “free” medical services at their particular hospitals and clinics. Here “free” doesn’t mean that it doesn’t cost, just that it is supposed to cost less than the real cost of the services. 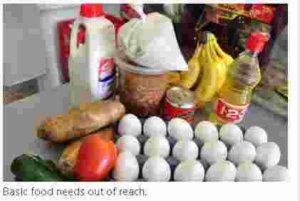 If somebody goes in to an operation or has quimotherapy, they have to purchase the actual bandages and such the doctors will apply after surgery, and for cancer treatment, they have to buy the medicine that is injected, but most of the rest is free.

So when it comes to food, the government makes a basic food basket which it uses to index inflation and adjust the national minimum wage. What happens is that the government turns around and controls these prices to make it appear that there is little inflation when in fact there is. For example, tortillas are in the basic economic basket of articles, so the price is important. What the government has done is first to control the price of tortillas, and anybody breaking that price to charge more has their store shut down. So it is like 8 pesos per kilo when in reality it should be 30. But then the government comes back and gives kickbacks or substities to the tortilla stores to make up the difference.

This is done on most of the articles in the “cansta basica” (basic economy basket items).

In Mexico, people in the out lying providences have a lower minimum wage ($68 pesos or $4.5 US dollars) than those living in the capital, Mexico City ($70 pesos or $4.67 US dollars). Consider that public transportation to and from work, and a torta (cheapo sandwich on the street) will cost this same worker about $3-$4 US dollars, then exactly what does he use to pay rent, L.P. gas for cooking, food, clothes, medicine, etc?

This has created a kind of mentality where people have to use levels to get their daily bread. People sell things on the side, and Mexicans are great at this. The street markets are where people have gone instead of regular jobs.

Through out the culture and up and down the economy ladder from poor people working in factories up through the highest paid politicans in the country, their salaries are contracted as “so many times the minimum wage”. A doctor working in a government hospital will make 20x the minimum wage, which is only $80 US dollars a day.

My take on the needs of normal family is that they need about $1500 US dollars to make ends meet. Few make that much (minimum wage is $93 US dollars/month). At Christmas, the federal law says that the worker receives a Christmas bonus of half a month of salary. Many businesses bump that to 2 months salary. So the situation is really critical.

The problem is not just work, it is sub-minimal work, or work that just doesn’t allow the worker to live. It is incredible to see people helping cars in and out of their parking spaces at Walmart pulling in $300 pesos/day in tips from that (they are not paid except in tips from the drivers). So a person can work for a pharmacutical company factory, and make 2 minimum wages and that is only $140 pesos ($9 US dollars) and working in the parking lot of Walmart they can make $20 US dollars a day?!?! Saturdays and Sundays they make about 3 times that by the way.

In Mexico there is only 1 gas station franchise, Pemex, owned by the government, and for  3 islands of pumps, 2 on each side, they have about 2 people pumping gas. One time I asked a guy at the gas station how much he makes. He said nothing. I couldn’t believe that. He said it gets worse, they pay him zero, zilch, nothing, and the station owners make them sell gas additives (10-20/day), and if they don’t sell the additives, they have pay for them anyway. None of those guys own cars usually.

When I asked more, he said he lives strictly by what the drivers tip him. As I asked at different gas stations, and talked to people who worked there before that were friends, it turns out that that is exactly true. By the way, pumping gas is dangerous. Breathing the fumes all day long usually causes cancer in those guys (and women now) after about 4-5 years. But they can make $200-$500 pesos in a single day (they work 24 on/24 off), so that is $13-$33 US dollars per every 2 days. Holidays when people are leaving town, they make a lot more.

So that is what is driving Mexicans to immigrate into the US. If you look at what they make here in a “good” job, and then compare it to cleaning people’s houses, making $100-$150 US dollars a day per house, it seems like a gold mine for them.