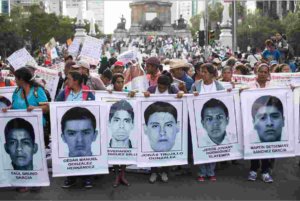 The Police’s involvement in the disappearance of 43 ayotzinapa students?

Recently, in Iguala, Mexico, a total of 49 teachers-to-be were kidnapped and killed. Six were killed in the initial attack, and 43 were trucked away. Several men confessed to executing the 43 and then incinerating their bodies with tires and gasoline. However, many Mexicans doubt these specifics and suspect local, state and federal governments of covering up what occurred, a violent political repression.

They were killed, at least in part, because they were poor, rural teachers from indigenous backgrounds, teachers who were speaking out.

All sources say police fired into a defenseless group of education students traveling through Iguala, a modern, historic town south of Mexico City. The students were almost all college freshman at the normal school (teachers’ college) at Ayotzinapa (Ah-yote-see-NAH-pah). The normal school students (normalistas) regularly organize public events to express teachers’ voices about managing schools. That day, they were part of a related activity, organizing to attend annual public marches commemorating the never-prosecuted 1968 military slaughter of hundreds of students in Mexico City. The normalistas carried no weapons. The government now tells the enraged public to forget about the “senseless” massacre. Politicians tender only the shallowest explanation of the massacre, now mentioned infrequently in the corporate-government media.

This is really a brutal event of the abuse of Mexican politians using the police for criminal (organized crime related) activity. First of all it reveals the actual condition in Mexico, that many of Mexico’s politicians are corrupt. That point is beyond obvious to all here. Secondly, it shows that the police forces that are supposed to protect Mexicans are actually just criminals (in many cases, but obviously not all), and that they all too easily are puppets in this play.

In this video (first 30 seconds are in Spanish, but the rest is either in English, or if Spanish speaking people are talking, the English translation underneath.

Missing and dead people in Mexico

More than 100,000 Mexicans have died in this “drug war.” According to Amnesty International, more than 22,000 people have disappeared. Much killing has been done by criminal gangs in the businesses of extortion, kidnapping, the sale of humans and human body parts, and the production and sale of recreational drugs. Much has been done by soldiers and police – often criminally allied – using US arms and funding.

Simply put, there is a great tragedy going on in Mexico. People are being slaughtered and instead of reporting this to the government and police for them to investigate and do justice, these very people are the ones doing the slaughtering!

I would recommend you read this article as it is a good overview to the situation here in Mexico with regards to the forces in play in the culture (school versus government).