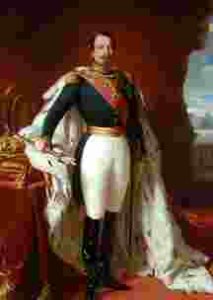 In the history of Mexico, at one time, Napolean “conquered Mexico”. He installed his nephew Maximilian as king of Mexico.

France had invaded Mexico in 1861, with the implicit support and approval of other European powers, as part of the War of the French Intervention. Seeking to legitimize French rule, Napoleon III invited Maximilian to establish a new Mexican monarchy. With the support of the French army and a group of conservative Mexican monarchists, Maximilian traveled to Mexico where he declared himself Emperor of Mexico on 10 April 1864. (continue reading about this time in Mexico’s past at Wikipedia.com)

The influence of such things has it effect upon the culture, history, and most importantly in this issue in Mexico, in the legal system.  This is why the Mexican Legal System Reform is so important, because it is overturning a system that has been rooted in Mexico culture since the 1860s. Since this time, legal trials were/are held behind closed doors, and each side presents their arguments in documents read by the judge in his chambers. This all happens without any actual meeting of the principle people of a trial (defendant, accusor, lawyers, etc). In a system fraught with corruption and brides. This all lends itself all too easily to continue this corruption.

The article in the MexicoCityNews about Mexican Legal System Reform gives us an update to the 2008 change in Mexican law that will go to a system based on the same principles and methods as used in the US court system. The article gives an update on the overall progress and which states are lagging behind.

What is entailed in the Mexican Legal System Reform

Mexico has 31 states and a single federal district (where we live in the D.F. Distrito Federal). 30 of these states have started the implementation of the new reforms (Mexican Legal System Reform). I want to quote a few things from the article, because it is extremely important to see how the Mexican legal system reform is progressing, and the Mexican legal system reform is well deserving of our prayers for Mexico as Christians.

Thirty of the states have begun implementing the changes, which replace courts that function behind closed doors, where judges read written submissions before reaching a verdict, with open adversarial trials in which oral arguments are made before the court. In addition, where the existing system operates on the premise that a person charged with an offense is guilty until proved innocent, the new one takes the opposite approach.

Although it may be incredible for Americans to believe, this has been the system in Mexico for many years. The burden of proof is not on the government lawyers representing their legal system, but on the defendant! What is important here is not just that people accused will most probably get something closer to true justice in their cases, but this is seen as a correction or trying to correct the corrupt court system. Living in Mexico for 30+ years myself, it amazes me how I here of court cases that are open and shut simply being overturned. Even in divorce cases where the man is pressing for divorce, somehow even though the law says he has a responsibility to alimony, and a division of their assets basically 50%/%0%, the decision is that the man does not have to do anything for his former wife. This is because the lawyers pay off the judges, and these kinds of decisions happen.

What is really amazing is that this reform would appear to be a step towards a more honest system. When the court trial is held in an open session, with actual lawyers presenting casing, and witnesses give their testimony publicly, and there is live cross examination, then others can witness the proceedings, and improper conclusions can better be challenged. This public aspect is something greatly lacking in Mexico. Here, the police wear masks often. When an important criminal is detained, they have news coverage of the fellow being transported and all the police in those videos have ski masks. When the police and military patrol dangerous areas, many times they wear ski masks of sun glasses to prevent the bad guys from taking their photos and trying to get to their family.

But to see judges “hiding” behind closed doors, this is just not right. I know that much of the secrecy today is because the drug cartels attack, torture, kidnap, and kill anybody that would be seen to oppose them. This is why drugs are just wrong. They produce a system that opposes all principles of law, freedom, and rights, entrapping their victims and others in their web of corruption.

Below are three videos on youtube on Judicial Reform in Mexico. Mexican Legal System Reform