Read this article Three Causes behind Mexico’s Crisis of Corruption. 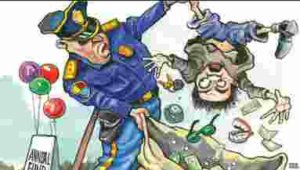 According to this article, the blame for Mexicos Corruption Crisis lies at the feet of the state. Living in Mexico 30 years, I would agree. To be exact, the Mexican government just does not “work”. It does not function as a government is supposed to do. For all the criticism of Felipe Calderón, his government brought in a lot of young preppy kind of workers that were very smart, and gave power to the government in “fixing” its inability. Of course a lot of this power was abused and wasted, and mostly it was set aside under Pina Nieto.

This is a really big problem in Mexico. He mentions from 1/3 to 2/3s of all workers are involved in the black market. This is basically going to central warehouses and buying goodies at reduced prices, and then setting up shop on a sidewalk, in a vacant lot, or in the street tanquis. These are in every neighborhood and once a week they allow them to block off a central street and people set up shops. Local governments step in and provide cleanup by city garabage collectors (but they charge the shop owners). Some even make stands with plywood for putting out goodies and a clothe roof which they give to the shop owners for the day (usually at a price also).

What happens here is that 1) there are no business permits, so anybody can show up, do what they want, sell even stolen goods, and disappear. Because these street markets are in the thousands each week, and some of them may extend to 2-3 miles, police can never find somebody that sells stolen goods. They jump from market to market.

2) there is no sales tax. Mexico has an IVA, a 15% sales tax on everything sold, and there is no recording of these sales, and no taxes paid although some shops make a big thing of collecting them. Moreover, this has gotten so out of hand, that some places, like downtown Mexico City, they even set up in front of regular shops, blocking customers from going into them.

3) There is no governmental control, so mobs enter in. In the street market near where we live, people pay the local jefe (chief) that governs these markets money. He gives part to the local governmental authority (directly to the person, not for governmental uses). First he has his cronies that goes through the market in the morning, and charges $5 dollars or so per 3×3 meter for each stand. They give a ticket for the day. Then throughout the day, they go back through, and if you don’t have a ticket you have to pay for it.

But things get worse. In these street markets, there are good positions and bad. So I know a couple that bought 3 stands (about 3 meters by 9 meters long) and paid the jefe some $20,000 dollars to rent it. They got no document for it, and if they don’t come 2-3 weeks in a row, they have lost it. No money is returned to them. If they show up after 8AM they have lost it anyway for that day. This is the going price for prize locations in the market. For people barely making $10-$20 a day many times, this is ridiculous. As you might imagine, there are people who sneak into the market after the cronies have swept through, put out their stuff and then watch for them against to grab the blanket and run.

No Accountability without taxation

The problem with the street markets is difficult. The government and police “let them get away with it” because of the great poverty in Mexico. But in a real sense, there are a lot of market vendors that make a lot of money. For these people, they pay no income taxes on anything. Besides being illegal, this leaves the government with an income shortfall.

The government cannot do its job because it is being undercut financially. If you add to this the fact that Mexican government officials are the highest paid in the world, and that besides that, most officials siphon off public funds for their private lives, the government engine is left without any steam.

To me, this mantra against guns is really amazing. While Mexico officially legalizes drugs, it makes illegal personal firearms. Maybe they should be doing the opposite, fighting drugs and legalizing guns so that citizens can protect themselves.

Over the years I have lived in Mexico, I have known a number of policemen personally at all levels of the thing (except the very top). While most seem like nice people trying to do their job, the overall perception is that they are JUST DOING THAT AND NO MORE. When they are called to go into a situation that they could lose their job, few want to risk it, so they go around a corner and wait. Being paid minimum wage, and then being asked for kickbacks by their bosses contributes to even less enthusiasm on their part. Moreover, there is an unwritten law that anybody that makes waves or doesn’t fit into the system will get those nasty life risking jobs always assigned to them. This is making policemen that think more about how anything they do affects their job status rather than doing their job.