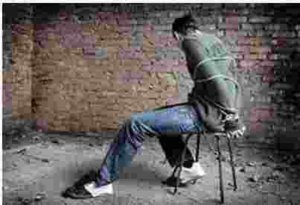 While the Mexican government continues to do “business as usual”, the real state of the country continues to spiral downward in an every increasingly extreme of kidnapping, drugs, violence, raging drug war, and basic crime disaster in Mexico making it a war zone. It is amazing to me exactly how stupid the Mexican government thinks its people are. While they sit in the riches ruling the country, the vast majority of Mexicans and Mexico is suffering.

This article in Mexico News Daily in English (originally in the Spanish daily newspaper “Milenio” gives some idea of the problem.

The drug lords have basically taken possession in the northern states bordering the US. They control things there, and increasingly the Federal government has had to address this by sending in the military to just maintain order. Over the past recent years we have heard of the entire police force of entire towns being secuestered by the government, basically imprisoning them in their own jails while all their firearms are taken from them, and each is tested to see if they were used in recent crimes. In some states (including the southern state of Michoacan) the entire police force has been imprisoned because of what they were doing.

In the northern state of Tamaulipas bordering Laredo Texas and Hidalgo/McAllen Texas, kidnappings are running at 694% above the national average. Normally there was about 16-20 cases PER MONTH, and then only 1 per month was investigated by the Attorney General’s office. Now there are 140 per month. Even on public transportation, they are stopping public transportation buses and kidnapping the entire bus.