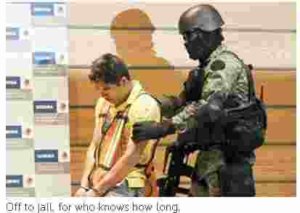 This article relates the problem of Mexico’s Impunity Problem, or criminals at all levels of society just doing what they want, and no justice coming down on them. Mexico has a horrible problem with this, and from the politicians which do whatever they want, or refuse to do their jobs, and mess things up, to criminals, to common people in the streets getting away with all kinds of things, this is Mexico.

The article relates the Global Impunity Index 2015 (IGI) which has listed Mexico as second from the bottom of worst countries with impunity problems. The Philippines is the only country worse than Mexico.

After analyzing and comparing data from 59 United Nations member countries, the IGI observed that those with the highest level of impunity are the Philippines, Mexico, Colombia, Russia and Turkey, which all have structural problems in their public safety and judicial systems. By contrast, the nations with the lowest IGI are Croatia at 27.5 points, Slovenia 28.2, the Czech Republic 34.8, Montenegro 34.9, and Bulgaria 37.5… IGI data revealed that for each 100,000 inhabitants, Bulgaria has 57 judges, Slovenia 48, Croatia 45 and Montenegro 42, well over the global average of just 17 per 100,000. Mexico came in with a mere four judges per 100,000 people. The phenomenon of impunity casts doubt on Mexico’s ability to fulfill the right to a speedy and transparent judicial process. The IGI notes that the majority of investigations into suspected, detained, arrested or arraigned individuals are not conducted openly. It also highlights the fact that 46% of the detained population is awaiting sentencing, in some cases for years. Mexico Daily News

More Articles about Life in Mexico