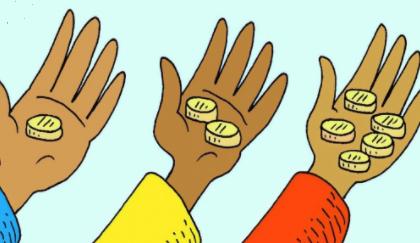 Inequalities in Christianity and Communism is an article where I explain the misunderstanding between Communism and Christianity.

We are all equal

In the sight of God, as God has made us, we are all equal.  But what does that even mean? What it means is that God does not unilaterally, or without recourse make some people  “damned” or disproportionate from the rest. Well, look around you because that is exactly the situation. Somebody is born an orphan shortly after birth, with physical defects, nobody to take care of them, etc. and somebody is born like in the life of Paris Hilton, everything you could possibly want. In consideration of the Inequalities in Christianity and Communism, we see clearly that God distributes to humans in a disproportionate manner.

But the equality we must insist upon from God is the equality of one with another before God in the justice hall of God. Anybody can get into heaven, even though everybody is a sinner. Equality is in answering God’s judging of our lives. God’s equality is obviously not in force in giving the same physical things and lifestyle to every single human on the planet.

The Parable of the Talents

The action of the “lord” here, which is a representation of what God “Lord” does with us, is simply that God gives different “blessings” to one person from another. This disparity is the exact point here. God doesn’t give an equal amount to everybody. Again in consideration of the Inequalities in Christianity and Communism, we see that God deliberately and by his plan and divine Will wants things this way. Different between different humans. The idea of a universal income between all people is not God’s plan or way of working. (1) Satan’s basic plan is against God’s. Who would have All Wisdom behind his ideas then? Who would insert bait and switch type ploy? (2) Even if God’s way was to distribute to everybody equally, Satan would use the wickedness of man to scheme to rob the distribute by those in charge of distributing. You never see anybody high up in the Communist party (nor even lower members of the Communist ruling party) as poor. Only the basic Russian, Venezuelan, Cuban, Chinese etc. communist citizen.

God bases this on what each person “can do” or has a capacity to handle. I wish I “had a capacity” to handle a million dollars but obviously, God has not seen fit for me to have that, probably because “I cannot handle it wisely.”

But where does this “capacity” that each one has in differing amounts come from? Back to God in his wisdom when he created each one of us, He gave us that capacity. So God acts as God should, doing what He deems best in the case of each person. But the disparity between people in both possessions, abilities, and the inherent capabilities that one is born with all comes from God in his wisdom for us.

Inequalities in Christianity and Communism makes us consider that God deliberately “PLANS” this disparity.

Matthew 25:24 Then he which had received the one talent came and said, Lord, I knew thee that thou art an hard man, reaping where thou hast not sown, and gathering where thou hast not strawed: Matthew 25:25 And I was afraid, and went and hid thy talent in the earth: lo, there thou hast that is thine. Matthew 25:26 His lord answered and said unto him, Thou wicked and slothful servant,thou knewest that I reap where I sowed not, and gather where I have not strawed: Matthew 25:27 Thou oughtest therefore to have put my money to the exchangers, and then at my coming I should have received mine own with usury. Matthew 25:28Take therefore the talent from him, and give it unto him which hath ten talents. Matthew 25:29 For unto every one that hath shall be given, and he shall have abundance: but from him that hath not shall be taken away even that which he hath.

This parable ought to cause the modern liberal to throw up and have epileptic fits! Take from the poorest and give to the richest! That is a gross sin, ultimate blasphemy for them! (Yet under the cover of deception, they, Communists at heart, exactly take from the poor to give to themselves, the rich). With God, it is in his right to do so but as stewards, this is wrong for them to do so.

But notice some things here. First of all, this is a moral issue. There is a moral duty obligatory upon every person to take whatever God has seen fit to give that person in this life and to use it for the glory of God. To not do so, then you are in a moral breach of the commandments of God.

Secondly, the laws of God are to reward more to those that have a lot when they use their possessions and abilities for God’s glory. The flip is also true. Those who have little from God and even so having little, they refuse to use what little they have for God, then God judges them harshly taking away what little they have.

Matthew 25:30 And cast ye the unprofitable servant into outer darkness: there shall be weeping and gnashing of teeth.

The ultimate “insult” for the person who has received something from God, even though a little bit, but that person does not use that for God’s glory is that they are cast into hell for their being obstinate against God’s working. Refusing to play by the rules and commandments of God.

But note that the Bible teaching here is exactly the opposite of the communist line of thought, that we should all “be equal” as far as this world’s possessions and opportunities. The point here is that Communism excludes the concept of an Almighty God that is Omniscience and All-Wise in his dealings with man. Quite frankly, why didn’t give all men the same status and abilities in life? Perhaps he did in Adam and Eve in the garden. But even with the two of them, Eve is under submission or subjection to Adam her husband. God works this way in his “All-Wise” being. He knows what he is doing,

1 Timothy 6:17 Charge them that are rich in this world, that they be not highminded, nor trust in uncertain riches, but in the living God, who giveth us richly all things to enjoy; 1 Timothy 6:18 That they do good, that they be rich in good works, ready to distribute, willing to communicate; 1 Timothy 6:19 Laying up in store for themselves a good foundation against the time to come, that they may lay hold on eternal life.

What should be obvious in Paul’s exhortation to Timothy is that God uses the physical things of our life as doors or things that affect our eternal status in eternity. More physical riches here is not equal to good for us in eternity. Physical “things” allow us to give of these things to others in need (1) to help them in God’s stead, as God wants, and (2) to credit to our eternal bank accounts eternal riches. Inequalities in Christianity and Communism is an article where I explain the misunderstanding between Communism and Christianity.

We are not all equal

So we have to admit that we are not all equal with what we have in this life whether it is possessions, abilities, or opportunities. We are just different one from another, and this difference is by divine edict, and we cannot do much to change this situation except work with what God has given us as best we can. That is God’s will for us by the way.

Ephesians 4:28 Let him that stole steal no more: but rather let him labour, working with his hands the thing which is good, that he may have to give to him that needeth.

God’s commandment for each person as far as working with what God gives you is (1) that you work physically to provide for your own needs, and (2) that you work to accumulate more than what are your basic needs, not to be rich and live in luxury, but rather so that you can help others in needful states and in lesser abilities states. Inequalities in Christianity and Communism is an article where I explain the misunderstanding between Communism and Christianity.

The Old Testament is full of references to the Israelites need to help the sick (lepers for example), as well as the widows, orphans, and immigrants, or foreigners among them. The foreigners are people who are at a natural disadvantage from not being “equal” with a typical citizen. When they become equal, then the idea is that the typical Jew should treat them as an equal, and cease to help them. Same as with widows, orphans, and anybody else that is in a class of being “needy” but gains wealth.

Today we see the Bible being used to represent the illegals as these foreigners in the Old Testament. But what is not being represented correctly is that these foreigners in the Old Testament sought to integrate themselves into the nation of Israel as typical citizens. This means that they accepted to be brought under the laws of the land. Nowhere is there any hint that they were illegals, rebelling against the laws of Israel. If they dwelt among the Israelites, they had to obey their laws.

Apart from the above-mentioned reasons for working with what God has given you, a man has a responsibility to support his own family besides himself.

1 Timothy 5:8 But if any provide not for his own, and specially for those of his own house, he hath denied the faith, and is worse than an infidel.

So a man should work with what God has given him to support his wife and children. This is a basic understanding so much that if he doesn’t recognize this and work towards this, any pretense that he is saved is a farce in God’s eyes. Inequalities in Christianity and Communism is an article where I explain the misunderstanding between Communism and Christianity.