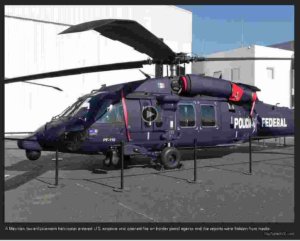 I try to keep you abreast of news and things happening in Mexico through my blog. This is absolutely amazing! A Mexican Military Helicopter enters the US and fires on US Border Patrol. Although the article does make clear that in this case, we are talking about only a few 100 yards into the US soil, they did fire on 2 cars (one unmarked Border Patrol, and the other clearly marked as US Border Patrol).

The article also reveals the US Congressman from California dug deeper and found some 300 such incidents over the past few years. According to this congressman, Mexico disrespects the US’s sovereignty. I don’t know about that point though. Along the border, most anything can happen, and having traveled along parts of the US-Mexico border, it is just a desert that is unmarked, so going over into the US a few hundred yards seems like a point that is very difficult to know when you would be doing that or not. Thus Obama’s official ignoring of the situation.

And for what it is worth, I have poor views of both the Mexican military and police forces on the Mexican side of the border, and bridery and corruption of the DHS is so obvious that it is pityful. Years ago, illegals had to cross the desert to avoid the US Border Patrol. Today, the coyotes take groups of dozens of people to cross at the bridges/checkpoints, and just because they give a sign, they use a credit card or any piece of plastic and the DHS person knows to accept it as a Green card. Nobody cross in the desert it seems (from people who have family members that recently crossed).

The other interesting thing is that the going rate now is $3000 to $4000 per person. The drug lords run these things now, and they have the “muscle” back in Mexico to hurt, kidnap or kill the illegal immigrant’s family members. They take them in a safe house on the Mexican side of the border, and check out their family contacts, and if that is right, then they move them across the border when the Border Patrol worker they have paid off is on duty. The US Border Patrol regularly rotates their shifts from checking ids to patroling, not telling them until they are at work where they will work that day. So these are US citizens that have played into the drug lords hands, and they are government officials. Of the dozens of illegals they get through this way, many are mules, carrying drugs on their person.

The 40 some underground tunnels from the Mexican side to the US are because they have to give these Border Patrol guys a lot of bribe money, and a tunnel is cheaper and can move more people more safely.