In this TEDS presentation, Simon Sinek explains the difference between the true leaders in the world, and all the rest of the world. He has a theory which he presents. 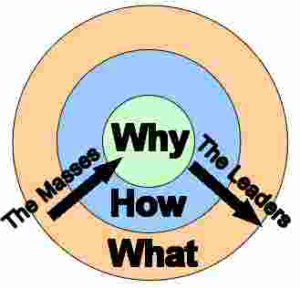 I find this lecture very useful for me as a missionary. One of the key points he makes is

“People don’t buy what you do, but why you do it.”

The key to “winning people to your side” is to work everything through your personal motivation first and as a priority.

I don’t know if I agree with him about the biological parts of the brain, but I think that the directing of a presentation towards the motivational aspect of our being is very on beam.

On this basis of three circles, most presentations are about facts and figures (the what) which is where communication is, and the decision making part of us (the why) is what the facts and figures of communication tries to penetrate. He makes a very important comment, “In a presentation, all the facts and figures are right, but it just doesn’t feel right.” His point is that accomplishing good communication doesn’t always get the person to make a commitment, because the motivation of “why” he should do something hasn’t been sufficiently addressed and/or sufficiently pressed. The point of all of this is to make people WANT to be a part of what you do, to support you, to be on your side. This is the main thrust of excellent presentations by the way.

Law of Diffusion of Innovation

“What you do simply serves as the proof of what you believe.”

He uses the example of Martin Luther King (which I disagree with a lot of what King preached by the way). People heard what King was saying. He was saying, “I believe…, I believe…, I believe…” And those people believed what he believed and they took up the cause of King, and made his cause their cause. None of those people came to King’s speech (the I Believe speech) for King. They all came because King hit a desire within them, and they came because THEY BELIEVED IN THE SAME THING THAT KING WAS EXPRESSING. That making alive the same desire in your audience is exactly what makes a great orator.

There are leaders and those who lead.

A leader holds a position of authority.

Those who lead are those who inspire us.