The summary of this is that Hillary protected from prosecution or investigation. When Hillary was Secretary of State, Pinchuk (the fourth richest man in the Ukraine) illegally sold pipelines to Iran, but Pinchuk gave $8.6 million to the Clinton foundation, and Mrs. Clinton turned a blind eye towards this illegal activity. 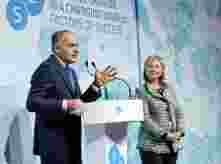 The impunity that the Clintons show in how they do business is amazing. They receive great amounts of money from foreign nationals and foreign governments in order to favor their position before the United States government.

There is no reason why the US government should allow the Clintons to receive foreign donations when they are so active in our government. This is indicative of how the Clintons do business in their official government capacity and how they blur their personal lives and finances.

“The baggage builds up over time… can we please stop it…”

What is amazing about this is the prohibitions against Iran was a law that Obama put into place, and Obama is saying that it is good and working! Yet the presumptive Democrat nominee for president, Mrs. Hillary Clinton, worked around the backdoor of this law to defeat it, and basically overruled the law by getting around it, and then she made a ton of money off of it! (8.6 million dollars to the Bill and Hillary Clinton Foundation which only actually gives 10% of their income to actual charities!). Unbelieveable stuff!