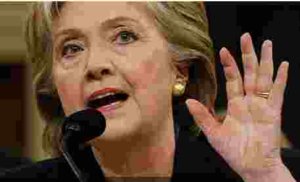 This commentary is a commentary on a very good article in the National Review on how Hillary slips out of all responsibility for her own bad decisions and wrong doing.

What this article points out is that the Democratics have a “machine” in place whereby everything one of their people do wrong is spun so that it is not their fault or it is not wrong in the first place. While this could be conceived as noble, the exact opposite is done by them against the Republicans.

The example used in the article is that of the Dems accusing George W. Bush after 9/11 for not having done more to prevent the disaster, but then they take Hillary totally out of any responsibility (although she was the head of the State Department that assigned those people in Benghazi). They did this a second time with Michigan governor Rick Synder in the Flint Water Crisis.

But if the buck stops with President Bush and Governor Snyder for things that they certainly were not charged with personally overseeing, why doesn’t it stop with Mrs. Clinton? Why is the investigation into the Benghazi attack a “conspiratorial witch hunt” and not an investigation into what was, at best, an incompetent handling of a terrible situation? Why is there always someone, anyone, there to take the fall? www.nationalreview.com

Is Hillary Responsible for her Decisions and Actions?

If the Dems are right and Hillary is an outstanding leader, then how did Benghazi even happen? Couldn’t she have forseen that the place is volitle and explosive, and if she would have had that great depth of perception, then she would have placed 10x more Marines on the ground from the beginning, and had an aircraft carrier watching that place for months beforehand. But she didn’t. So her perception of things is no so great.

Looking at her emails, if she was such a great politician and leader that was aware of how people want to destroy the US by stealing our secrets and working to tharp everything we do before we do it, why didn’t she know that her email server was going to be a target? I mean the US Senate, FBI, and CIA email systems and websites and servers were constantly being hacked, so how did she use that great discernment there? Frankly, she was more worried about another Whitewater happening than US National Secrets. She was more concerned about protecting her own rear end than doing her job as a leader.

Question: If Hillary enters as President, will she again use a private server?

It is simply amazing that the White House (Obama implicated beside Hillary) order the rescue marines to change from a uniform into civilian clothes and back again 4 times instead of taking off to do their job. This is simply frustrating, and it shows a total breakdown in leadership for both Obama and Hillary.

In the news Obama and the Dems want to spin this so that the military is at fault. Unfortunately, that is not right. The military will only act on orders, and those order come from the President, and here at an embassey under the State Department, the Secretary of State advises the President. So what happened is their fault, not the military’s fault.

The Spin Doctors then make the report to find out what went wrong a partisan witch hunt instead of an honest investigation. Was the Nixon investigation a witch hunt? No people wanted to know what happened.

Why did Hillary decrease the security in that compound over the months before the attack when there were an ever increasing number and severity of problems? What is apparent from the report is that the military was not optimized to do its duty. This is exactly what Obama has done in his presidency, destroy our nation and our military.

Obama continues to deplete our stockpiles of missiles and military ordinance by “pounding the sand” in Libya (blowing up expensive bombs and missiles on just pieces of sand that has no people, no buildings, not even a tree. The Pentagon continues to plead with the White House that they need more money for replacing what is being spent, but Obama wants us to be as weak as we can be.

Hillary Clinton’s Career should be over

While not everything wrong with Benghazi was Hillary’s fault (Obama’s commander-in-chief is to blame also), but her lack of insisting on protecting her own people in Benghazi should force her to resign all political aspirations, not open the door and usher her into the Presidency.

A little reported news fact about Benghazi is that while the US military forces were playing footsies with itself under Obama’s pulling of their strings, the force that went into action and saved so many lives in Benghazi was the old regime of Libya Moamar Kadffi’s deposed generals. The CIA got in touch with them, and they actually rescued those Americans.

Now will Hillary thank them publicly? How about Obama? If they did that for us after we kicked them out of power, how is it that Hillary’s whole make Libya fall plan was good? It was flawed and fatally wrong from the beginning.