Obama-Clinton Terrorism Support. I think that the biggest lie that Obama and now Hillary Clinton have perpetrated on the American people is that somehow they are “for” America and are defending us.

Obama refuses to accept that there is a hate crime, a war, being against Americans. Sharia law says anybody homosexual has to be killed. The Orlando terrorist was following Sharia Law, the Islamic beliefs.

Obama tried to minimize and mitigate the Muslim aspect of the Orlando killings. What all the recent terrorist acts was the Islamic element, and that there are Muslims who are terrorists. We are seeing a failure of presidential leadership.

Clinton: See my previous post on Hillary Career Criminal and down in the FALN Terrorists section, and you will see how President Clinton pardoned 16 FALN terrorists because N.Y.C. councilman asked Hillary to get their pardon in exchange for his support for her Senate run. After she agreed, 2 days later, they were pardoned.

My observation here is that these people are ruled by what further’s their personal cause, and what is beneficial or right has nothing to do with their decisions or positions. Obama and Hillary are not for America, they are only in their positions to get what they can out of America.

This is a commentary from a rabbi about Obama’s latest speech about not calling this terrorism “Islamic Radical Terrorism”.

Obama-Clinton Terrorism Support. Obama must have gotten an immediate ulcer on hearing this news. A Muslim individual attacked and killed a homosexual hotspot. So which favored group by Obama gets slammed by Obama? If he says that Mateen was a muslim terrorist then he attacks his beloved religion, Islam. So that won’t work. If he says that Mateen was a homosexual, and so it was a gay on gay crime (that just so happened to drag Islam through the mud), then again he sees no winning stance for Obama and Company there either. So what he effectively has done was to attack the Republicans and Christian conservatives!

I saw in the news a story about a Chick-Fil-A restaurant close to where they were donating blood on the Sunday that it happened, and they don’t open on Sundays, but two of them opened and gave free food to those donating blood for the survivers. What that tells me is that Christians are good people, loving their enemies. This is in stark contrast to Muslims who kill their enemies at any cost, any way. Christians follow the Bible and in the Old Testament there were wars started by or end by Israel (as a nation).

But notice that King Saul was condemned by God because he killed king Agag when he waited until after the “heat of battle”. In other words, murder is premeditated killing outside of a war context. War on the other hand has killing that is not sin in God’s eyes. But this is on a well defined battlefield, and under a typical “war” setting (a normal battle field). I will say one thing for the Muslims, their point of drone attacks from nothing would seem more like murder than war killing. Going into people homes and killing them when there is no battlefield setting seems to be more on the illegal killing also. Terrorism entirely is wrong (sinful) under these paradigms.

Was the Orlando murders “Terrorism”?

So was the Orlando killings terrorism? Yes it was. Mateen claimed alligence to Al-Queda when he made a phone call in the middle of the killings. He also had a friendship with Salha who went to Syria and blew himself up on behalf of Al Qaeda. This would clearly indite him as a terrorist. Two people can make a network, so why does Obama come out and deny that there is any evidence of a network when clearly there is? Obama is pro-terrorist. Why cannot Obama called a terrorist a terrorist? What does a terrorist need to do in order to be identified as a terrorist in Obama’s mind.

Mr. Obama, let me put it another way. Instead of called them muslim radical terrorists causing more innocents to join in their terrorist cause, maybe you reluctance in called them terrorist is provoking them to go into more and more extreme acts of violence trying to get you to recognize them as being 1) Terrorists, and 2) Muslim! Your chicken hearted position is causing these people to go to more and more extreme acts.

Terrorists being Sheltered and Protected by Obama’s Policies

Another interesting point on this matter is that the FBI had Mateen under their scope of investigation, and he was let go. If he was a close friend of a terrorist, going to his place of religious worship with him, why was he taken off of the FBI’s watchdogs? It is because Obama wants the FBI to focus on conservatives and Republicans because they are more dangerous than real terrorists.

Judge Pirro says that Mateen (in high school) actually was cheering when the planes hit the towers, and that he bragged about being a kin to Osama Bin Laden. He got thrown out of school because of this kind of stuff. He visited Saudi Arabia twice (which interesting how Saudi Arabia keeps comes up in relation to terrorists), and yet he isn’t worth watching. How can somebody make that kind of bragging points and the FBI see this, and then turn off any further investigation on the guy?

Cut off their finances? Come on! What have he been doing up to now?

Obama is angry about the term of “Radical Islam”. That is the most important thing to tell America? Obama is worried about guns. Muslim “backlash”? Obama spent more time attacking America than the terrorists.

Obama failed in his speech to get encouragement from Obama. He said basically that “we are doing enough”. Obama has no empathy or feelings for Americans. Obama-Clinton Terrorism Support

Obama is as much a problem in all of this as Islamic terrorism. Hillary is more of the same? Obama always sees that America is always the problem. Obama lectured America for attacking Islam and using the term “radical islam”.

Obama: Islam is a peaceful religion

From the National Review there is an interesting article debunking Obama’s premise.

“What is [Islam’s] judgment on sodomy and lesbianism?” Sistani replied: “Forbidden. Those involved in the act should be punished. In fact, sodomites should be killed in the worst manner possible… The inspiration for Muslims to brutalize and mass murder gay people does not come from ISIS. It is deeply rooted in Islamic law, affirmed by many of Islam’s most renowned scholars. This is why, wherever sharia is the law, homosexuals are persecuted and killed. See, for instance, this 2014 Washington Post report listing ten Muslim countries where homosexuality may be punished by death (Yemen, Iran, Mauritania, Nigeria, Qatar, Saudi Arabia, Somalia, Sudan, United Arab Emirates, and Iraq — notwithstanding its new, U.S.-supported constitution)… The problem with mass immigration from sharia enclaves is not merely that trained terrorists may infiltrate the immigrant population. It is that sharia-adherent, assimilation-resistant Muslims will form sharia enclaves in the U.S., as they have throughout Europe, where young Muslims will be “radicalized” under our noses in the years to come.”

Notice the last sentence. Assimilation-resistant Muslims form enclaves for radicalizing young Muslims. This is what Obama is doing. He is providing these Muslim enclaves. He is the one behind US terrorism.

Obama-Clinton Terrorism Support. Obama’s response to the Orlando problem is that of taking our guns away, and restricting them as much as he can.

First of all, the framers of our Constitution saw a central point in our country that insisted on each American citizen having the right to bear arms, to own them legally and to carry them legally. This is for the purpose of using them to defend themselves if necessary.

So Obama has presented absolutely no logical, reasonable argument against the framers’ point of view. That being the case, the framers of the Constitution keep their point of view over Obama.

Secondly, taking away all the guns in America except for the army and police is not a solution. Let’s look at the Boston Marathon Bomber. Are we going to outlaw pressure cookers too? How about cars and vehicles? How about alcohol bombs, yes, that would be a good thing, let’s outlaw all forms of alcohol.

Remember, Omar Mateen had a legal gun permit because he was a security guard. No matter how strict the gun control laws would get under a Democratic plan, police and security guards are going to legally have guns. What the weak point here is simply that we see Muslims are okay guys, and we should automatically give a pass on security to all Muslims when more than not Muslims are in terrorism or in the background of terrorists recently.

Thirdly, if Obama is so dedicated to removing arms from everybody, friend and foe, why doesn’t he take away the guns from his own Secret Service agents that are protecting him as a starting point? Those guys are okay to have guns. So this is not dedication to no arms, it is just another way Obama hates America.

Iran’s nuclear deal as an Armament 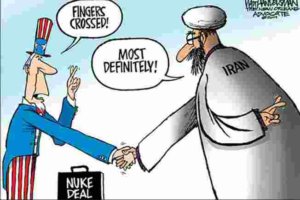 Let’s look at the Iran nuclear deal. If Obama was so dedicated against arms for everybody, why did he push that deal through? Why didn’t he remove any possibility that they could get a nuclear weapon out of that nuclear plant? With no nuclear plant, they would not have any possibility of making a nuclear bomb. With one, there is always that possibility, and we need unbiased checks on their nuclear plant. Instead Obama let’s the fox guard the henhouse, and the rest of the world cannot bother them with what they are doing there until the Iranian nuclear bomb goes off somewhere! Wow Obama, you are really inconsistent! Absolutely shutting Iran down would be more consistent. But then we all know that you are pro-Islam, anti-American.

She comes out strong now against “lone wolves”. Why was she on this issue before now? Silent. Because Don Trump has been against this all along, now she is facing him, and she is speaking out (i.e. changing her position). So can we understand that she is now strong against terrorists? No. It is more of the same Washington establishment junk. She is just promising voters something she will never live up to if she gets into the presidency, heaven forbid!

Consider buying me a cup of Coffee

If you enjoyed this post, or if you just would like to help support this ministry (I am a missionary in Mexico City evangelizing and pastoring a local Baptist Church) and this website, then consider donating the equivalent of a cup of coffee, of a cup of coffee and a little dessert.

All donations will be used to maintain this website and keep on developing good posts promoting missions and helping missionaries.