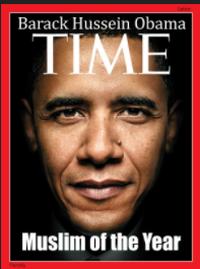 Obama leans Muslim, or closet Muslim? I was talking with an American friend here in Mexico, and he was surprised that I causally said that Obama is Muslim. He disbelieved me.

This article in American Thinker notes factually the slips and “misstatements” that his Administration “corrected” where he naturally refers to his religious faith as Muslim.

I read this article and it just reinforced to me that Obama is no friend to Christianity. Obama leans Muslim or closet Muslim?

We must understand that the Islam religion is against Christianity, and that being very obvious, they are our enemies. While Presidents come and go (thank the Lord they go), the foundational concepts and precepts of the United States are based on the Judio-Christianity foundation. That means our government is orientated towards principles that are taught in the Bible, and both Islamic principles and Christian principles clash against each other.

Barack Obama has left our country in shambles. This was his purpose from the beginning to do anything he could to destroy those Judeo-Christian foundational principles that make our country great.