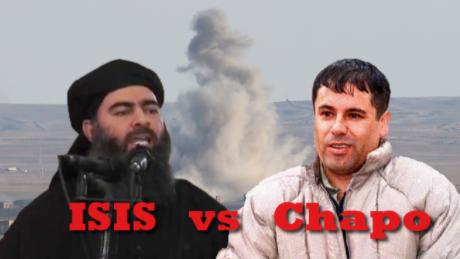 ISIS and Mexican Cartels in Common

This article is very interesting because it points out how parallel and similar are the methods of ISIS and the Mexican drug cartels. Scary article when you consider that all of this is happening just across the border in Mexico, and with the legal/illegal immigration from Mexico into the US, and the Mexican population already in the US dragging their lifestyle (and problems) with them across the border, Americans should be concerned.

We as Americans must understand that there are common threads that run through the Mexican Drug Cartels and ISIS. While Isis is only interested in Islamic extremism, they have to pay the bills, so these terrorist groups are turning to drugs as a means to fund themselves.

On the other hand, Mexican cartels are all about making money like a business, and nothing is immoral or unethical in their thinking. So if they sell to, or buy from ISIS, that is not going to bother them at all.

Similar ruthless people often join together. The issue here is that the Mexican drug cartels have expanded their business model in the last 20 or 30 years than what they were doing before.

There is traffic of human slaves via these cartels. These are usually young girls in prostitution in the US, also adults that are trapped in a relation with the cartels where they take them to the US, and then they work in sweat shops in California until “their bill is paid.”